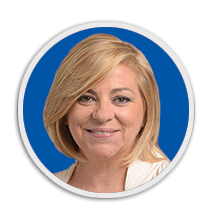 María Elena Valenciano Martínez-Orozco is a member of the Strategic and Advisory Committee. She is a Spanish politician of the Spanish Socialist Workers' Party, part of the Party of European Socialists. Following the 1999 European elections, Valenciano became a Member of the European Parliament, where she served as Deputy Secretary-General and spokesperson of the Spanish Socialist Delegation. In addition, she was the Socialist Group coordinator in the Subcommittee on Human Rights (DROI).

Following the elections in 2014, Valenciano reentered the European Parliament and assumed the position of chairwoman of the Subcommittee on Human Rights (DROI). In this capacity, she was also a member of the Democracy Support and Election Coordination Group (DEG), which oversees the Parliament's election observation missions.

In addition, she served on the Committee on Foreign Affairs (AFET), the delegation for relations with the Maghreb countries and the Arab Maghreb Union, and the delegation to the Parliamentary Assembly of the Union for the Mediterranean. She was also a member of the European Parliament Intergroup on the Western Sahara.

During the 2015 presidential elections in Haiti, Valenciano headed the European Union's observation mission to monitor the preparations and organisation of the vote.