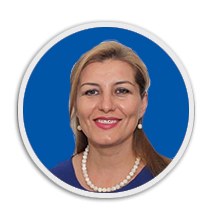 Dr Alma Lama was Ambassador extraordinary and plenipotentiary of Republic of Kosovo in the Italian Republic and non-resident ambassador in the Republics of Malta and San Marino, from 2016 until July 2019. Previously she was a member of the Kosovo Assembly, and served in two legislatures, 2011-2014 and 2014-2016.

As MP, Lama has been strongly engaged in the democratization of society and the institutions, the transparency issues, freedom of media, human rights and good governance.

She was the first MP in the history of the Kosovo Parliament that drafted and introduced a law (The Protection of the Journalistic Sources) which was approved in 2013.

During the first parliamentary term, she was a member of the board of Women Caucus, a cross-party caucus in Kosovo Parliament, very much engaged in the promotion of women’s role in society and their portrayal in the media.

She also initiated the first monument in Kosovo dedicated to the contribution of the women during the war, called “Heroinat” (Women heroes) that is located in the centre of the capital of Kosovo.

Lama has a very rich experience, of more than ten years in journalism, in Albanian and international media. She has worked on public Television in Kosovo, and later in Albanian TV station Top Channel as a senior correspondent, covering the process of negotiations for status between Kosovo and Serbia. During this period Lama was engaged also in investigative journalism in war crime cases and corruption affairs.

In 2012, she was selected one of the 50 Emerging Women Leaders of the World, by “Women in Public Service Program.” co-founded by Secretary of State Hillary Clinton, the U.S. Department of State, and five leading women’s colleges – Barnard, Bryn Mawr, Mount Holyoke, Smith, and Wellesley – and housed at the Woodrow Wilson International Center for Scholars.

She was part of a number of high-quality international training on media, leadership and election management.

Lama has studied Language and Literature at the University of Tirana. She holds a doctorate in Political Science and International Relations.

Dr Lama is specialized in democratization and international missions in post-conflict societies.