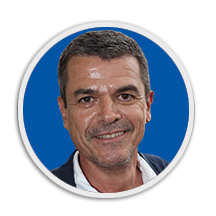 Alain Chabod is a senior media and communications expert – A former journalist and editor covering international affairs for European television channels (Arte, France 24), Alain has been involved in elections since 2010 as a media analyst and press expert mainly for the European Commission and the Organization for Security and Cooperation in Europe (OSCE). He has served as such in a dozen of international Election Observation Missions in Africa, Central Asia, Europe, Latin America and the Middle East. He started implementing election technical assistance projects in 2015 in Haiti with IFES. In 2017, Alain was Deputy Executive Director of Reporters without Borders (RSF), the leading Paris-based NGO advocating worldwide for freedom of speech. Alain joined ECES in 2018, first in Afghanistan then in Nigeria. He holds a Master degree in journalism from the University of Strasburg.