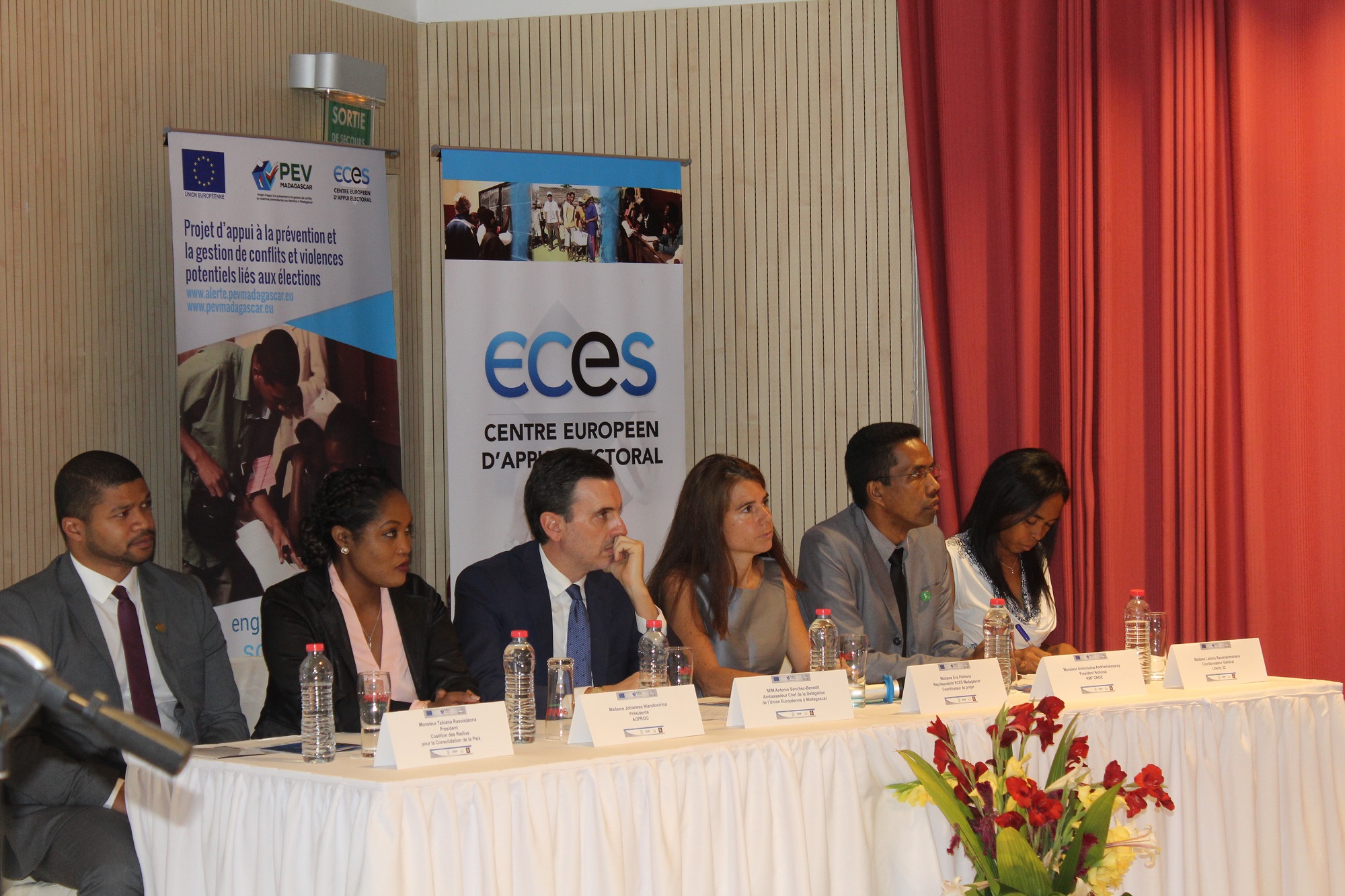 At the end of December 2017, ECES signed the ‘Project to Support Prevention and Management of Conflicts and Potential Violence related to Elections in Madagascar, PEV-Madagascar’.

This project funded by the Instrument contributing to Stability and Peace (IcSP) of the European Union, is in continuity with the interventions of ECES in Madagascar since the electoral cycle of 2013. The project is based on the lessons learned, on the achievements and on the partnerships established within previous projects such as the 'Project to Support Credible and Transparent Elections, PACTE Madagascar', the project 'Citizen Initiative for Peacebuilding, Leadership and Stability, INCIPALS' and the regional project' Preventing Electoral Violence in the countries of the SADC region, PEV SADC'.

The project, which has a duration of 20 months and a budget of 1 million EUR, aims to contribute through inclusive dialogue initiatives with all electoral stakeholders to foster a peaceful environment and mutual trust.

The consolidation of peace and stability requires an enhanced dialogue at all levels of the Malagasy society. Preventing and resolving potential conflicts also requires inclusive dialogue among all relevant actors. Civil society organisations and the media are ideally placed to establish links between the different actors and the general population. Therefore, the project aims to support the role of these actors in promoting a culture of peace and tolerance and enhance their capacity in conflict prevention, peacebuilding and response to crises.

The overall objective of the action is to contribute to the prevention of potential conflicts and violence related to elections. The specific objective is to build the capacity of civil society, the media and other electoral stakeholders, including security forces, through dialogue initiatives and activities aimed to support mutual trust and collaboration to prevent election-related violence.

The action is structured around three action pillars. The first component includes a series of activities aimed at operationalising a conflict prevention mechanism by setting up an early warning and rapid response tool based on a capacity-building programme for the actors involved in preventing/reducing tensions.

The second component aims to promote trust among civil society and the security forces through an awareness raising programme and initiatives to support collaboration between electoral actors.

The third component focuses on strengthening the role of the media in building a peaceful environment through journalism training and the establishment of a media monitoring system as early warning and rapid response tool to identify of potential tensions. This third cluster of action also includes the production of outreach programmes to promote a culture of peace and tolerance.