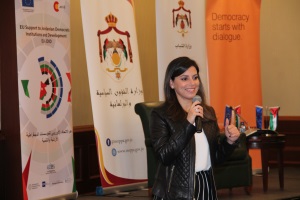 Some 67 youth from across the Kingdom gathered at the Dead Sea over the weekend to discuss youth involvement in politics and the challenges faced by young members of political parties in Jordan.

Organised by the Ministry of Youth (MoY) and the Ministry of Political and Parliamentary Affairs (MoPPA) with the support of the ‘EU Support to Jordanian Democratic Institutions and Development (EU-JDID)’ programme, the two-day workshop sought to assess the current state of youth participation in partisan life and propose ways forwards/visions for the future.

He highlighted the government’s efforts to address pressing national priorities such as unemployment, poverty and the fight against terrorism, noting that youth are as one of the first groups affected by these issues. He called on activating their role inside the political parties and reaching leadership positions.

The minister noted that MoY is currently working on developing a national library with a series of toolkits on political terms, political parties and youth capacity building in cooperation with MoPPA through the EU-JDID programme.

Voicing his pride in this collaboration, MoPPA Acting Secretary General, Dr Ali Khawaldeh, stressed: “It is crucial to develop the partisan life in Jordan, with a special focus on youth involvement, in order to enable them to reach the parliamentary life, based on multiparty democracy.”

“Youth are the biggest age group in Jordan and the most conducive to change,” he continued, noting that this conference aims at empowering youth through a series of dialogue sessions that enhances their political participation.

For his part, country representative of EU-JDID’s partner, the Netherlands Institute for Multiparty Democracy, Rami Edwan, stated: “We believe that there is great room for parties to adopt a more professional approach in developing their programmes and communicating effectively with the population, which will result in a more mature political party landscape.”

During two days of discussions centered around the topics of national identity and citizenship, youth in partisan life and political participation, attendees highlighted the various difficulties that hinder their participation and action within political parties.

“Out of all the parties represented here today, how many have helped their members to find job opportunities or enhance their livelihoods,” asked one young man from the audience, stressing that youth face many more pressing challenges in their daily life such as unemployment, poverty and lack of basic services.

“What we face are not so much the limitations on freedom of speech or political life but the economic hardships like the lack of decent jobs or poverty,” said Mahmoud Haymour, from the Jordanian Democratic Popular Unity Party

“The political party system is still in its initial stage in Jordan, and we face a lot of problems, especially among the youth. What we need is to see more encouragement and awareness to develop this,” said 33-year-old Nadine Hasweh, from the Civil Alliance party.