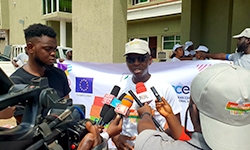 Over the weekend of November 2nd, 3rd, 2019, the Independent National Electoral Commission (INEC) of Nigeria embarked on a mass sensitisation campaign, kicking off in Lokoja, capital of Kogi state. The campaign aims at educating the citizens on the need to participate fully and peacefully in the upcoming governorship elections and as well shun vote buying and other ills in the 16 November governorship election.

Youths in their hundreds danced round the town with drums and trumpets distributing leaflets, handbills and posters that speak against all electioneering malpractices as the election day approaches. Some inscriptions on the posters and handbills urge citizens not to sell their votes as this is tantamount to “selling their future” and it is “when votes count that democracy would be consolidated”.

One of the recurring decimals in every election process is the worrisome incidents of election induced violence. There is no gain saying the fact that, election violence portends great danger to lives, property and the election process. It is also disturbing that, the youth are often used as willing tools by unscrupulous politicians who preyed on their vulnerability to instigate violence and disrupt elections.

It is in view of the Commission’s determination to address the disturbing trend, that along with the European Centre for Electoral Support through the European Union funded Support to Democratic Governance in Nigeria (EU-SDGN) programme had been championing youth-led and youth-centered initiatives to promote youth awareness and non-violent participation in the electoral process. The proposed youth walk to mobilise youth is in consideration of security threats assessments that indicated some parts of Kogi state as flash points. This action is hinged on the need for a change in approach on youth engagement for peaceful elections. The campaign offered hands-on approach to youth mobilisation for peaceful elections as against the conference like initiatives; workshops and seminars. The youths known for their values for entertainment exploited these values to get across to the youth population with messages on voter education and non-violent participation in elections.

The reach of the initiative, extended to areas with high population of vulnerable youths aimed at mobilising them for effective and non-violent participation in the forthcoming Governorship Elections in Kogi.

The objectives of the work were;

The one-day youth walk to mobilise youth for peaceful participation in Governorship Elections in Kogi and Bayelsa Elections will be at the State level. Participation will be drawn from INEC Youth Ambassadors (IYAs), youth focused CSOs, Corps Members, and state office and headquarter staff. Local musical groups were also engaged, flyers on peaceful elections and other voter education materials were distributed at the event. There were stopovers at strategic locations like motor parks, viewing centers etc. that have high population to ensure adequate dissemination of the voter education.