Training of Legal and Police Officers on Prosecution of Electoral Offenses 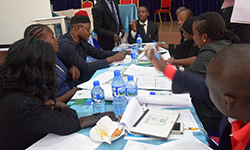 INEC with Support from the European Centre for Electoral Support (ECES) organised a two-day training for INEC legal officers and police officers. The training takes place on 10 & 11 August 2018 at the Kini Country guest inn, Mike Abdul close, off Jos road, Akwanga, Nassarawa State, Nigeria was funded by the European Union through the Support to Democratic Governance in Nigeria (EU-SDGN) programme.

ECES Project Coordinator, Mr. Rudolf Elbling, said the training sought to boost the confidence of the legal officers and positively reposition them in handling of election petitions.

Mr. Rudolf, represented by Maria Teresa Mauro, the Senior Election Expert (Legal), ECES Nigeria, said there is the need for a clear regulatory framework to guide every stage of the electoral process and set the rule of the game. “This training is the eight in the series of such trainings being organised for staff of legal Services Department in the last two weeks.

“It is my hope that presentations and deliberations at this training will keep participants abreast of best global practices in electoral law and place them in a vantage position to professionally render valuable legal services to the commission,’’ he said.

The Project Coordinator of ECES reiterated the Centre’s commitment to continue to support INEC and other organisations for democratic governance in Nigeria.

Mrs. May Agbamuche-Mbu, the INEC National Commissioner, also the chairperson, Legal Services of the Commission, who delivered the welcome address, appreciated the ECES for funding the training programme.

She said that the commission was fully determined to fulfill its responsibilities in the area of prosecuting electoral offences while hoping that the Electoral Offences Commission was set up eventually.

Mrs. May Agbamuche expressed optimism that participants at the training would brainstorm on issues of adequacy of the law in prosecution of electoral offences, capacity of the staff to handle such, capacity and willingness of police to investigate and stringency of penalties, among others. Agbamuche-Mbu restated the commitment of the commission to conduct free, credible and acceptable election as well as prosecuting electoral offences.

“The idea of this training is well conceived as the interaction and dialogue between our legal officers and police will go a long way in removing some bottlenecks in the prosecution of electoral offences. INEC and the police must necessarily work together as envisaged by the law,” she said.

In his welcome address, the Resident Electoral Commissioner (REC), Nasarawa State, Dr Uthman Ajidagba also commended the European Centre for the training. He noted that the training was expected to produce best way forward to tackle challenges of prosecution of electoral offences in the country.

Ajidagba, represented by the Administrative Secretary, INEC Headquarters Lafia, Mr. Martins Boris said, “during the training, recommendations should be made to amend the law to grant the commission power to arrest/investigate and prosecute electoral offences,” he said.

Presentations and deliberations at the training aimed at keeping participants abreast of best global best practices in electoral law and place them in a vantage position to professionally render valuable legal services to the Commission.

Participants at the event were comprised of legal officers from the headquarters and state offices of the Commission as well as police officers tasked with prosecution of electoral offences. Resource persons at the training former Inspector General of Police, Mr. Solomon Arase among others.