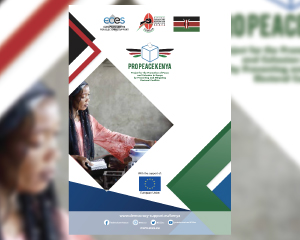 The “Pro-Peace Kenya” is a project for the Promotion of Peace and Cohesion in Kenya by Preventing and Mitigating Electoral Conflicts, dubbed “Uchaguzi Bila Noma 2022”. The Project is funded by the European Union and implemented via a partnership between the European Centre for Electoral Support (ECES) and the National Cohesion and Integration Commission (NCIC).

NCIC is a Constitutional Commission mandated to promote national unity, equity and the elimination of all forms of ethnic discrimination by facilitating equality of opportunities, peaceful resolution of conflicts and respect for diversity among Kenyan communities. ECES is an independent, non-partisan and not for profit Foundation established in 2010 that has implemented activities already in more than 50 countries, mainly, but not only, in Africa and the Middle East, primarily with funding from the EU and EU Member states.

ECES and NCIC entered into a Memorandum of Understanding (MoU) to promote joint activities for a peaceful electoral environment from 2021 to 2023. The resulting “Pro-Peace Kenya” Project supports the interventions of NCIC and aims at preventing election related conflict and violence in the general and presidential elections of 2022 and beyond. The Project builds on the various experiences of collaborating partners in working to promote peace and cohesion to prevent and mitigate conflicts and electoral related violence, as well as to build trust, inclusion, cohesion and political space, notably in view of supporting the “Road Map of Peaceful Elections 2022” published by NCIC.