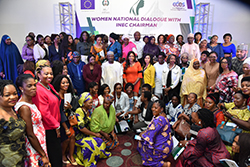 The equal participation of women and men in all aspects of public life is a key principle of democracy. In a bid to uphold this principle, and give women a level playing ground in politics, a dialogue forum was organised by INEC with support from the European Center for Electoral Support (ECES) to amplify the voices of women in public life, hear their concerns and pain points while seeking their inputs and perspectives in view of the 2019 elections. This is one among other efforts of driving inclusion and women participation in elections.

Similarly, the docuseries “Voice of Women” was launched at this event. The documentary exposes the true picture of what women participation looks like in Nigeria and Africa while offering possible solutions.

INEC Chairman, Yakubu Mahmoud during the forum stated that INEC remains an equal opportunity player irrespective of gender and disability as women’s role in any democracy and particularly in the electoral process cannot be overemphasised while pointing out areas of incremental improvements.

However, there is always room for improvement as ECES’ Project Director, Rudolph Elbling pointed out the untapped potential that lies among the women folks. Also, National Commisioner – Dr. Adekunle Ogunmola while speaking at the event made reference to African women in history who fought for different courses. He enjoined that their legacies must be carried on by women in this era. It is this desire and as a means of ensuring better accountability, that the dialogue forum was created.

Women had the opportunity raise concerns over issues such as political parties’ marginalisation of women, bullying of electorate especially women and persons living with disability by some INEC officials and security personnel, implications of the electoral bill not passed, opportunities for women to serve, available sanctions for party agents misconduct, etc.