This booklet offers an insight into the National Assembly of Madagascar, as of 2014. 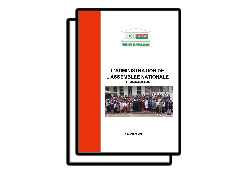 "This booklet contributes to the achievement of the implementation of the Strategic Plan for the Development of the National Assembly of Madagascar including its commitment to transparency and a better understanding of its operation procedure. The support of the European Centre for Electoral Support (ECES) and the Department of Cooperation and Cultural Action (SCAC) of the Embassy of France was fundamental in the achievement of that book."