After 11 years of continuous engagement with the African continent in electoral support, one of the most important goals of our founders Fabio Bargiacchi and late Abbot Apollinaire Malu Malu has materialized!

On 20th May 2021, Fabio Bargiacchi, Executive Director of ECES, and Bankole Adeoyemira, the new Commissioner for Political Affairs and Peace and Security of the African Union, signed a Memorandum of Understanding (MoU) aimed at consolidating their comprehensive partnership in the areas of Electoral Integrity, Prevention of Electoral Conflicts, Human Rights and Women Political Participation.

This document sanctions a crucial step forward in the collaboration between the two organizations. The MoU intends to further strengthen the cooperation and synergies between ECES and the African Union (AU), recognising their complementarity in the promotion of electoral integrity, the prevention of electoral violence and the enhancement of human rights in relation to electoral processes.

Among other activities, ECES will collaborate with the AU also in three main areas:

- The prevention, management and mitigation of Electoral violence where the AU-ECES collaboration will develop a conflict typology database to enhance early warning mechanism for the prevention of electoral conflicts and explore the full potential of ECES Leadership and Conflict Management skills (LEAD) training curriculum;

- The enhancement of human rights and women's political participation where the two organizations will have the possibility to work together in the legal and technical assistance to national institutions and political parties to increase the participation of women, youth and disadvantage groups in electoral processes.

Driven by the objectives and principles reflected in its Constitutive Act which emphasize the importance of good governance, popular participation, the rule of law and human rights, the AU plays a leading and crucial role in the contribution to the maintenance of peace and security in the African context also with the support of the European Union and its Member States.

Moved by the mission of supporting sustainable democratic development, ECES sees the implementation of this MoU as the possibility to further broaden shared goals with the African Union and provide an important contribution to promote regular, credible, sustainable and inclusive elections in African countries.

As stressed by Fabio Bargiacchi: 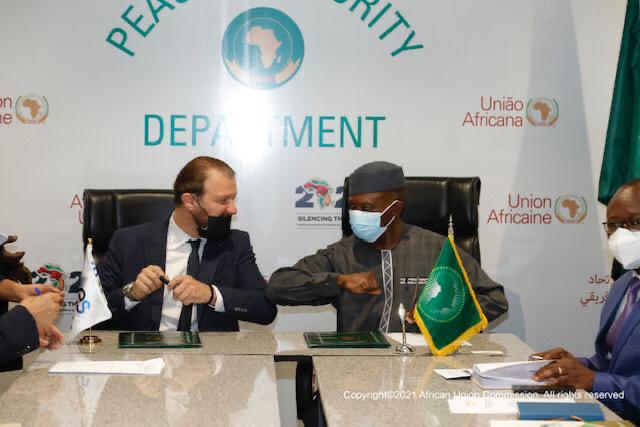 ''The signature of this MoU formalises an already existing partnership that comes at an important juncture when it comes to election and democratization processes worldwide also impacted by the Covid 19 pandemic. I would like to reiterate the commitment of ECES to continue supporting the efforts of AU to promote the common objective of more inclusive and peaceful elections.

A closer collaboration with the African Union and this MoU represents a crucial step for ECES. This in facts was one of the main goals of ECES when, with Abbot Malu Malu, we thought to establish ECES as a European, not for profit, independent and non-partisan foundation aiming at supporting the partner countries of the EU and of its Member States, especially in Africa and in the Middle East, to organize their electoral processes in a credible and transparent manner as the best contribution to prevent electoral conflicts and to promote stability toward inclusiveness and fair societies. Apollinaire was a man of the church and a champion of peace and democracy for his country and the African continent given his roles in African elections. He wished elections to become a celebration of democracy everywhere, especially in Africa, and not causes of conflicts. He is surely proud of the signature of this MoU and its implementation from now on.”