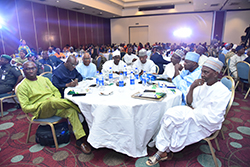 Since the release of the 2019 general elections timetable, the Independent National Electoral Commission (INEC) has been involved in interactions with stakeholders on different levels in order to have their input and perspectives as the 2019 General Elections draw near. The European Center for Electoral Support (ECES) within the EU-SDGN programme was happy to support a National Stakeholders Forum and interaction with the INEC Chairman and other key personnel within the INEC framework.

The one-day dialogue which the INEC chairman pointed out has become imperative and a part of the Commission’s plan ahead of every major election drew stakeholders from various Political Parties, Civil Society Organisations and the Press, Security Personnel, States’ Resident Electoral Commissioners, INEC National commissioners, representatives of Persons Living with Disabilities (PWDs) among others.

The forum was an avenue to clarify, assure and update stakeholders on what INEC is doing towards the 2019 while examining the roles stakeholders play to improve the conduct of elections as the country moves towards 2019 General Elections.