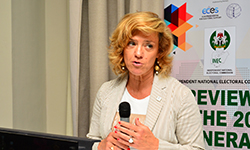 One of the critical players within the electoral process are the collation officers. As such their feedback is paramount to Election Management Bodies and it comes as no surprise that INEC Nigeria organised a session of debriefing for the State Collation Officers for the Presidential Election (SCOPE), some of whom served as returning officers in the Governorship Elections.

The European Center for Electoral Support (ECES) under the European Union Support to Democratic Governance in Nigeria was more than happy to be a partner in this debriefing exercise. Giving a goodwill message, ECES President Monica Frassoni said that it is crucial to hear from the SCOPE and with an understanding of the importance of a SCOPE's role and it is of no surprise that they were under such pressures. She stressed the need for an open discussion and a search for new initiatives and programs which ECES is eager to be a partner on in hope of creating a greatly improved and well-structured process.

Prof. Mahmood Yakubu, INEC Chairman marking the 8th meeting in the series for the Review the 2019 Elections open, appreciated the sacrifice of the SCOPE in the face of verbal and even physical abuse. He encouraged the serious minded and credible persons of the SCOPE to cast their net wide and unearth issues that must be addressed and also what must be done differently. Stressing the fact that elections in Nigeria are heavily dependent on the universities where adhoc staff are drawn from and NYSC members who are a large part of the process are drawn from. Prof. Mahood emphasised that this relationship must be sustained but there is always room for improvement as friends will criticise while detractors will condemn. Hence, the need for the collation officers debriefing.

While giving his welcome remark, Sam Olumekun mni, Lagos state Electoral Commissioner brought to mind the criticism the commission received during collation as a result of some inconsistent numbers despite the pasting of result at polling units. He requested SCOPE to clarify on such postulations.  National Commissioner and Chairman Planning, Monitoring and Strategy Committee (PMSC), Dr Mustapha Lecky said collation not done accurately can lead to serious challenges and a loss of public confidence. He pointed out that the SCOPE were drawn from the academia because of the trust accorded personalities within that institution even though that has been met with so much criticism since the last elections. He called on the SCOPE to engage in frank discussions and share their field experiences from the collation process. International Foundation for Electoral System (IFES) which has worked around 198 countries and been in Nigeria since 1998 partnering with INEC is one of the partners organising the 2019 election review. Its Acting Country Director, Seray Jah stressed the importance of the tough, selfless and enormous responsibility undertaken by the SCOPE. Seray said money cannot adequately pay for the effort put in by the collation officers and hopefully there will be an improvement in the work done by the SCOPE and INEC after this meeting.

Some of the broad issues discussed were; staff in the academia departing from the known character of credibility, issues of training and resistance towards training, provision of security for SCOPE, logistics issues in the collation process, issues of knowledge on the electoral process and commission's laws and guidelines, deployment, posting and transportation of staff (SCOPE), focus on the collation process to eliminate errors, tabulation, declaration and security and management of the collation center.

At the end of the exercise, the deliberations proved to be very enlightening as experiences shared by the collation officers allowed the commission to take note of areas that must be addressed for a credible and efficient electoral process and systems.