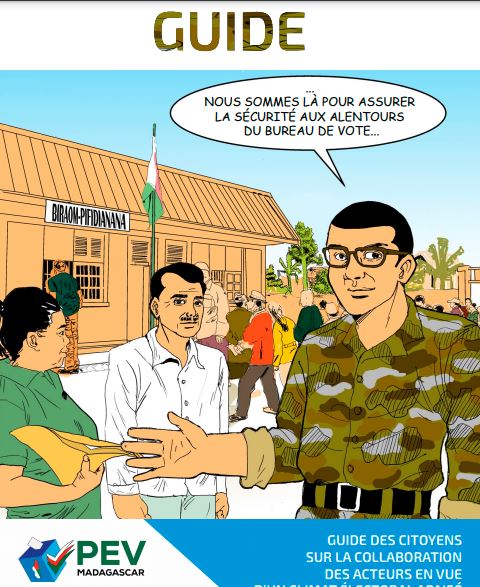 This illustrated guide was created as part of the "Project to support the prevention and management of potential conflicts and elections related violence linked in Madagascar - PEV Madagascar ”.

Targeted at the citizens of Magadascar and elsewhere, the guide is the fruits of a collaboration between ECES and PEV Madagascar's various implementing partners, namely the National Election Observation Committee (KMF / CNOE), the Liberty 32 association, the “Coalition des Radios for the Consolidation of Peace ", the Hai-serasera Manonga Dia (CID) and the "Association University for the Promotion of Gender (AUProG) ”. It is financed with the support of the European Union (through the Instrument contributing to Stability and Peace- IcSP).

This guide was launched in October 2018 and reissued in February 2019 following recommendations during multi-actor workshops. The new version is enriched to cover any type of election.