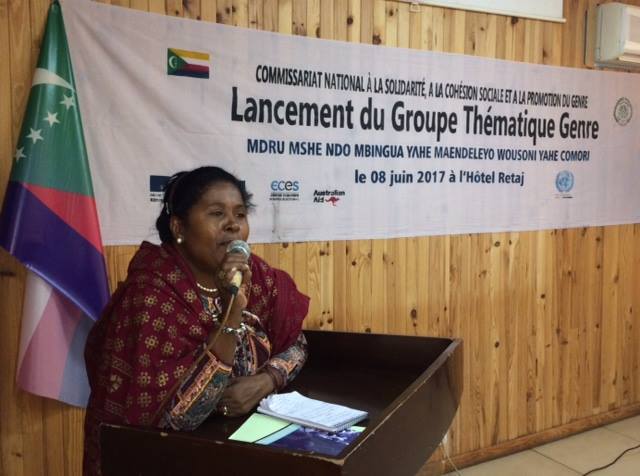 On the 8th of June, 2017 in Moroni (Union of the Comoros), the National Commissariat for the promotion of gender in the Union of Comoros, successfully launched the Thematic Group on Gender in the presence of more than fifty Comorian participants at local and national level as well as development partners (The European Union, the French Cooperation, the United Nations System with the presence of a UN Women representative and the Australian Cooperation).

The Thematic Group on Gender which benefits from ECES’s technical support, aims to reinforce the exchange and the collaboration in order to better coordinate initiatives undertaken in different sectors concerning the promotion of gender in the political domain where too few women are candidates in elections. As a reminder, according to a study conducted by ECES for the 2015 and 2016 elections on the topic of female candidates, only 3.76% of candidates for the Assembly of the Union were female; for the Commons, 3.72%; for the Counsel of the Islands 5.43%; for Governors, 4.47%; and for the Presidency of the Union, 3.7%. If we follow the methodology of UN Women who consider that the percentage of women in national legislative assemblies is now a standard measure of the achievements of a country in the area of female participation in political life, the participation of Comorian women in The Union of the Comoros is a priority in order to redress a situation (1 out of  every 33 deputies, ie 3.03%) that places the Union of the Comoros at the bottom of the African Union rankings.

The Thematic Group on Gender will permit a consultation and a follow-up on ongoing activities, advancement of public policies and legislation on gender. These actions will make it possible to advocate more effectively with national and international institutions so that the Comorian women might be better represented in the different development-related domains.

Madame Sittou Ragadha, the first female minister and first female deputy of the country presented a history of female participation in politics in the Comoros, but also addressed the challenges that women face when they want to begin in politics. “We have unfortunately internalised the idea that women cannot be elected. Some of us have dared to believe that they have a place in the political sphere of the country. But it is a tireless fight and sometimes we are our own obstacle. We must be capable of believing in ourselves, encouraging ourselves. We have done the same studies as men and are just as capable as men. A position in politics must not be a gift offered to women, but a right that one must dare to assert.” Mr. Christophe Casas, from the European Union Delegation in Mauritius equally saluted the initiative: “We are very happy with this initiative on the part of the Commission on Gender and with the large participation we find today. It is important that all actors are mobilised so that they might have greater political representation, notably in the Assembly of the Union of the Comoros. We encourage you to work closely with the population and the local associations so that these goals might become a reality.”

As parity between men and women is an important part of democratic development, the support provided by ECES to this thematic group reinforces the initiatives undertaken by ECES in the Union of the Comoros. The “Ngamdjochinda!” project (“I can do it” in Comorian) supported by the Australian Cooperation (www.eces.eu/fr/posts/lancement-du-projet-ngamdjochinda-aux-comores) contributes to this objective : ensure that in the next elections more women dare to present themselves and work in depth on traditional perceptions of women so that they are more likely to be elected.
Related