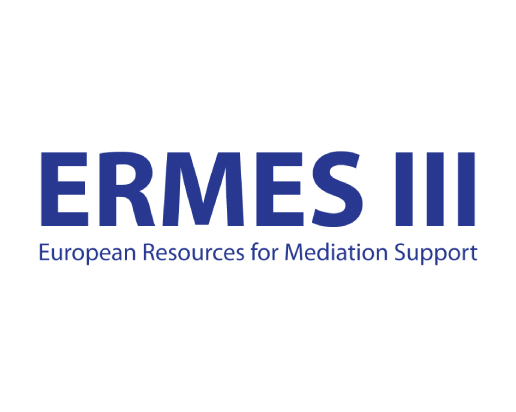 The European Resource for Mediation Support III or ERMES III, is an EU-funded project launched in 2014 and implemented by a consortium of specialised not-for-profit and international organisations and institutes.

They include the European Forum for International Mediation and Dialogue; MediatEUr (Belg); Interpeace  (Swit); the  European  Centre  for  Electoral Support ECES (Belg); Fondation Hirondelle (Swit) and the Institute of Research and Education on Negotiation ESSEC-IRENE (Fr). The consortium is led by the College of Europe (Belg) and has an overall budget of 3.5 million Euros.

The project is currently in its third phase, which started in August 2018 and will end in August 2021. The first two phases of ERMES (I and II) were executed from 2014-2016 and 2016-2018. These two phases were implemented by a different consortium of specialized organizations.

ERMES has been successful in meeting the need of providing experts in the context of changing timelines and under short notice, proving its great level of flexibility and responsiveness both in the selection and mobilisation of non-key experts as well as in providing various logistical and administrative support tasks.

The project is funded by the European Union and is implemented under the supervision of the Service for Foreign Policy Instruments (FPI), in close consultation with the European External Action Service’s Mediation Support Team situated within the Division for Prevention of Conflicts, Rule of Law and SSR, Integrated Approach, Stabilisation and Mediation (PRISM), which ensure the political steer. The individual assignments are managed and coordinated together with the relevant Services and Geographic Units within the EEAS and the European Commission, as well as with EU Delegations.