This report presents the recommendations of the EU EOM in Venezuela in 2006, led by ECES President, Monica Frassoni. 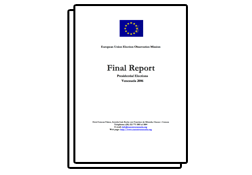 Responding to an invitation of the Consejo Nacional Electoral (CNE) of the Bolivarian Republic of Venezuela to observe the Presidential Elections on December 3rd 2006, the European Union Election Observation Mission initiated its deployment in the country on the November 15th, 2006. The Mission led by Monica Frassoni, Member of the European Parliament (MEP), included 154 observers from member states of the European Union, as well as from Norway and Switzerland. The observers were deployed in 17 States and in the Capital District, to follow and observe the elections. The observation work included the analysis of the pre-electoral political situation, the campaign, voting on Election Day (the 3rd of December), the counting, transmission, and aggregation of results. All of these observation activities were carried out according to: the European Union’s established methodology; the “Declaration of Principles for International Election Observation”, adopted under the aegis of the United Nations in October 2005; the Regulation for International Election Observation for the 2006 Presidential Elections, adopted by the CNE on the 5th of October 2006; and the Observation Agreement signed by the Consejo Nacional Electoral of the Bolivarian Republic, Venezuela and the European Union on the 15th of November 2006. A delegation of the European Parliament, headed by Manuel Medina Ortega (MEP) and consisting of six other MEP’s joined the EU EOM on the 30th of November.