This report presents the recommendations of the EU-EOM in Bolivia in 2009, led by ECES President, Monica Frassoni. 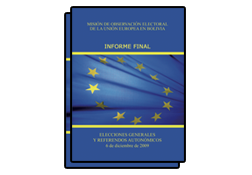 Invited by the Government of Bolivia, the European Union Election Observation Mission observed the Constituent Assembly Election and the Referendum on Regional Autonomy that were held on July 2, 2006. The mandate of the EU-EOM, led by Monica Frassoni, was to observe and assess the whole election process in light of the Bolivian legal framework and international principles for election observation. The electoral process complied largely with national legislation and international standards, especially in the areas of freedom of expression and transparent election administration. The legal framework provided an adequate basis for conducting credible elections. Election Day proceeded smoothly and peacefully, with a turnout of 84.5%, equalling the highest level of participation in the last 25 years achieved in the December 2005 general elections and thereby confirming the commitment of the Bolivian authorities and voters to democratic and genuine elections.