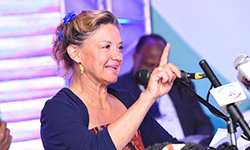 The 6th Biennial General Assembly of the ECOWAS Network of Electoral Commissions (ECONEC) which held in Abuja from the 5 to 7 August 2019 began with a Symposium on the Promotion of Inclusivity in the Electoral Process. The twin event was organised by ECONEC in collaboration with the Independent National Electoral Commission (INEC) and the European Centre for Electoral Support (ECES), with joint funding from the European Union and the Federal Republic of Germany.

At the opening ceremony of the Symposium and General Assembly, Nigeria’s President H.E. Muhammadu Buhari represented by the Secretary to the Government of the Federation Mr. Boss Mustapha, said that the Assembly was an encouraging sign for the democratic process. However, he urged governments in the region to do more on political inclusivity through legislation as Nigeria is striving to do. Citing the signing of the “Not-too-young-to run” bill into law on 31st May, 2018, he said work is still being done to ensure the integration of other categories of citizens such as persons living with disabilities (PWDs) and those internally displaced into the electoral process.

Head of the European Union’s Delegation to Nigeria and ECOWAS Mr Ketil Karlsen, in his goodwill message said If inclusivity is not provided, people are at risk of undermining democracy, continued stability and economic growth of countries & region. That's why the European Union works to promote the participation of youths, women, people with disability, marginalised poor people & IDPs and the President of the European Centre for Electoral Support (ECES) Monica Frassoni, went on to recount some of the activities that ECES with support from the EU and Federal Republic of Germany are able to achieve.

In the end, the symposium recommended concrete steps towards enhancing political inclusivity and the presentation of two ECONEC publications – Report of the Cost of Elections Study and ECONEC Activities in Support of Credible Elections; while the ECONEC General Assembly adopted the Activity Report and Financial Report of the past two years (2017-2019) prepared by the Secretariat under the supervision of the Steering Committee led by President Mahmood Yakubu, Chair of INEC Nigeria and elected a new steering committee with Dr Maria do Rosario Lopes Pereira Goncalves, Chair of CNE Cabo Verde as its president.