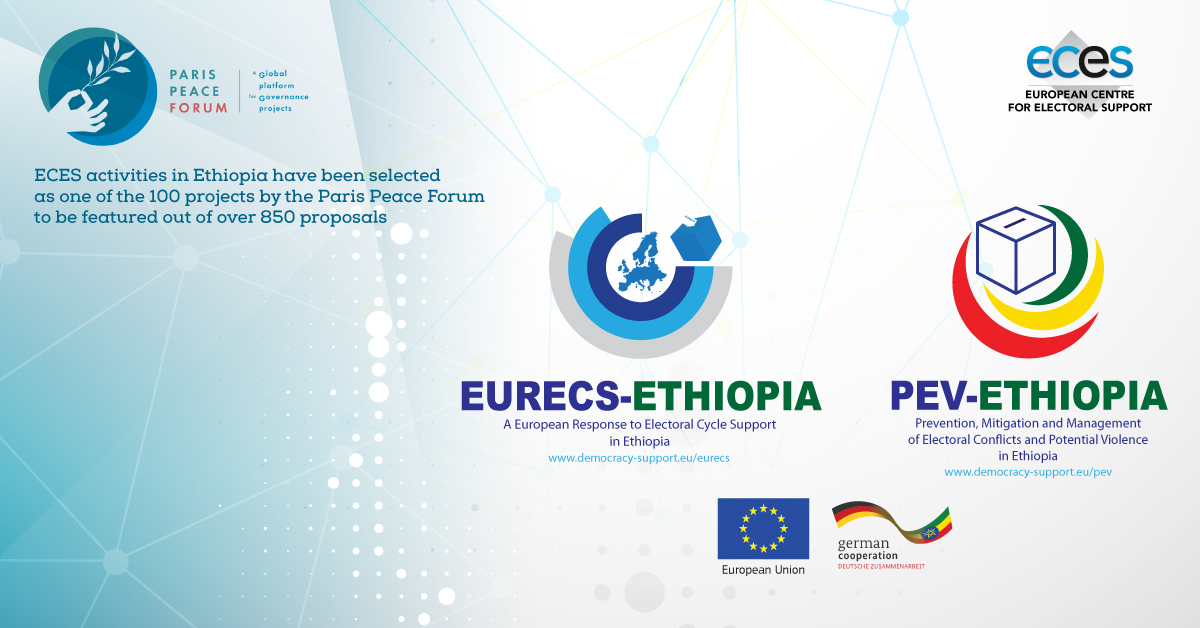 Our activity to support the upcoming electoral process in Ethiopia and funded by the European Union and Germany was selected as one of the 100 projects to be featured during the Paris Peace Forum, out of over 850 proposals!

The 100 selected projects were announced 100 days ahead of the 3rd edition of the Paris Peace Forum (PPF), which will be held under the theme “100 solutions to bounce back from Covid19”.

The international forum, which is slated for 11-13 November 2020, is a world renown event on issues of global governance and multilateralism that acts as a convening power to bring together all committed actors and as an incubator to help advance concrete solutions for better global governance.

ECES is delighted to have been chosen among 850 applications – a record number since the Forum’s creation- from all NGOs, companies, international organisations, states, etc.

Fabio Bargiacchi, Executive Director and co-founder of ECES, voiced his happiness and pride to see ECES’ activities in Ethiopia selected as one of the 100 proposals. "It is the first time we are selected at the Paris Peace Forum which is a testimony to our commitment to promote inclusive and democratic electoral processes around the world with the funding of the European Union and its Member States also considering that Germany is our second donor after the EU."

"I also salute the selection of our colleagues from the 'Joint EC UNDP Task Force on Electoral Assistance' for their activities in Zambia, Burkina Faso and Ethiopia. Indeed, ECES has been coordinating with UNDP in different countries for years. Furthermore, I am delighted to see them selected as I personally contributed to the creation of the Joint EC UNDP Task Force back in 2007, coordinating it until the end of the year 2010 when I co - established ECES."

In its official announcement, the PPF stated: “In 2020, the world is facing a health crisis with dramatic consequences that knows no borders and calls for collective solutions. Yet international coordination is at a loss, while short-term national calculations and lack of solidarity, especially with developing countries, take precedence.

The Paris Peace Forum was created to respond to this crisis of multilateralism, which is not new but has sharply increased in 2020. Given the scale of the challenges before us, the Forum will devote its third edition to projects and initiatives from around the world aimed at providing immediate responses to the Covid-19 crisis, improving our resilience in the medium term, and rebuilding a more sustainable world.”

About EURECS and PEV Ethiopia

This project seeks to strengthen the National Electoral Board of Ethiopia (NEBE) to raise the profile of an independent, credible and effective institution that will deliver inclusive and democratic electoral processes in Ethiopia. The action seeks to contribute to enhancing the transparency, credibility and public confidence in the NEBE, as well as in the electoral process.

The scope of impact of the EURECS project is to contribute to Ethiopia’s stability, peace and prosperity. In fact, since its establishment in 2010, ECES has always worked to support EU partner countries mainly in Africa and the Middle East to organise credible and transparent electoral process, considering it the best contribution to their stability, peace and sustainable development.

The potential for scaling-up is given by the fact that the EURECS activities are implemented in synergy with the PEV Ethiopia project, also funded by the EU led by ECES since June 2019 to contribute to the Prevention of Electoral Conflicts and Violence in Ethiopia via the support to networks of CSOs. The two projects constitute the two biggest EU interventions in the context of Ethiopian general elections 2020, to contribute consolidating democratic institutions and the rule of law in the context of the cooperation with Ethiopia.

EURECS innovative and copyrighted approach has been the backbone of ECES successful intervention in more than 50 countries in the last 10 year and has proven to be effective in several other challenging contexts. This constitutes the guarantee that, if properly tailored on country’s specifies and peculiarities, this methodology can be successfully replicated to support many electoral processes around the world in favor of beneficiary countries of the development cooperation of the EU and of its Member States.