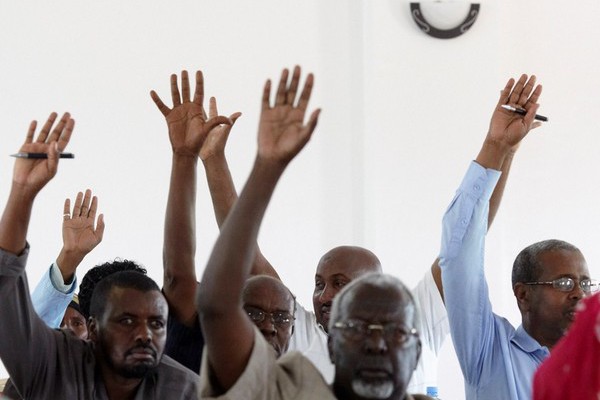 BRUSSELS/NAIROBI, 8 April 2020 – Interpeace and the European Centre for Electoral Support (ECES) have established a new partnership which aims to reinforce support to Electoral Commissions in the Somali region on their democratisation processes.

For almost two decades, Interpeace has worked closely with Electoral Management Bodies such as the National Electoral Commission (NEC) of Somaliland since 2005 and the Transitional Puntland Electoral Commission (TPEC) since 2013. The collaboration with ECES will bring a unique set of capacities that will support and strengthen the process of democratisation and democratic governance in the region.

The partnership will combine Interpeace’s 25 years of peacebuilding experience in the Somali region and ECES’ solid technical expertise in electoral assistance in over 30 different contexts worldwide in an effort that will deepen support for democratization and democratic governance in the region.

Interpeace President, Scott Weber, noted that: “This partnership with ECES demonstrates our commitment to sustain and advance our support to democratic governance and electoral processes while ensuring our work has lasting impact on the overall social cohesion in the Somali region.” Interpeace and ECES already enjoy a strong partnership and have collaborated on other global engagements including serving as consortium partners within the European Resource for Mediation Support (ERMES), which helps to deliver inclusive peace mediation and dialogue processes at the international, national and local levels.

Fabio Bargiacchi, Co-Founder and Executive Director of ECES, on his part highlighted that “With ECES’ innovative strategy on election support and Interpeace’s extensive experience in the Somali context,Ibelieve this partnership will go deeper and further to ensure all-round support is available and accessible to Somali electoral stakeholders”.

In the framework of this collaboration, the two partners have been interacting with the various donors and Electoral Commissions of Somaliland, Puntland and Somalia. On 7 April 2020, ECES and Interpeace participated to the first donor group meeting for Somalia. This meeting also had in attendance other electoral assistance providers like the UN, Westminster Foundation for Democracy among others.