This summary presents the results of a study on citizens' perceptions of power in  Madagascar. 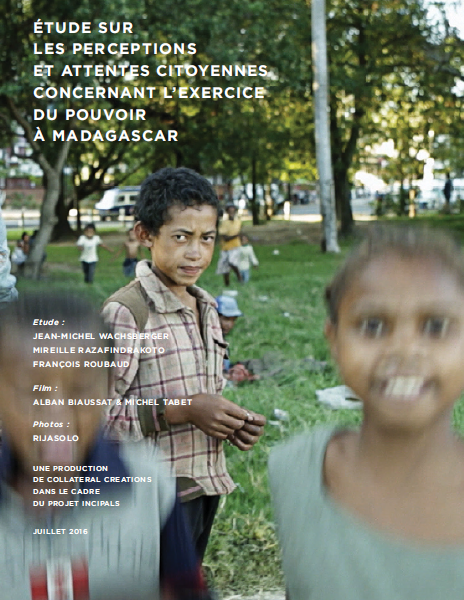 Within the framework of the project INCIPALS (Initiative Citoyenne pour la Consolidation de la Paix, Leadership et Stabilité, www.incipals.eu) funded by the European Union and implemented by a consortium led by the European Centre Electoral support (ECES), a study and an audiovisual documentation on "citizen perceptions and expectations of the exercise of power in Madagascar" were produced. The results of the study and the audiovisual project were made public on  Friday, 15th July 2016 at the University of Ankatso - Antananarivo, Madagascar. Click here to access the summary of the study.

This scientific study is completed by 26 minutes documentary film entitled "Zana-bahoaka - neo rebel Malagasy". The film is a collection of perceptions and expectations of citizens about the exercise of power in Madagascar. Click on following this link to watch the film: www.youtube.com/watch?v=KDczDUzgWUY

The film was directed by Alban Biaussat and Michel Tabet. In order to add a whimsical touch to the study,  Rijasolo realized a photo reportage. This photo work has been publish in a book entitled "Authority and contestations in Madagascar." In addition, a photo exhibition will be held from 15 to 22 July 2016 at the "Centre de Ressources des Arts Actuels de Madagascar (CRAAM)".