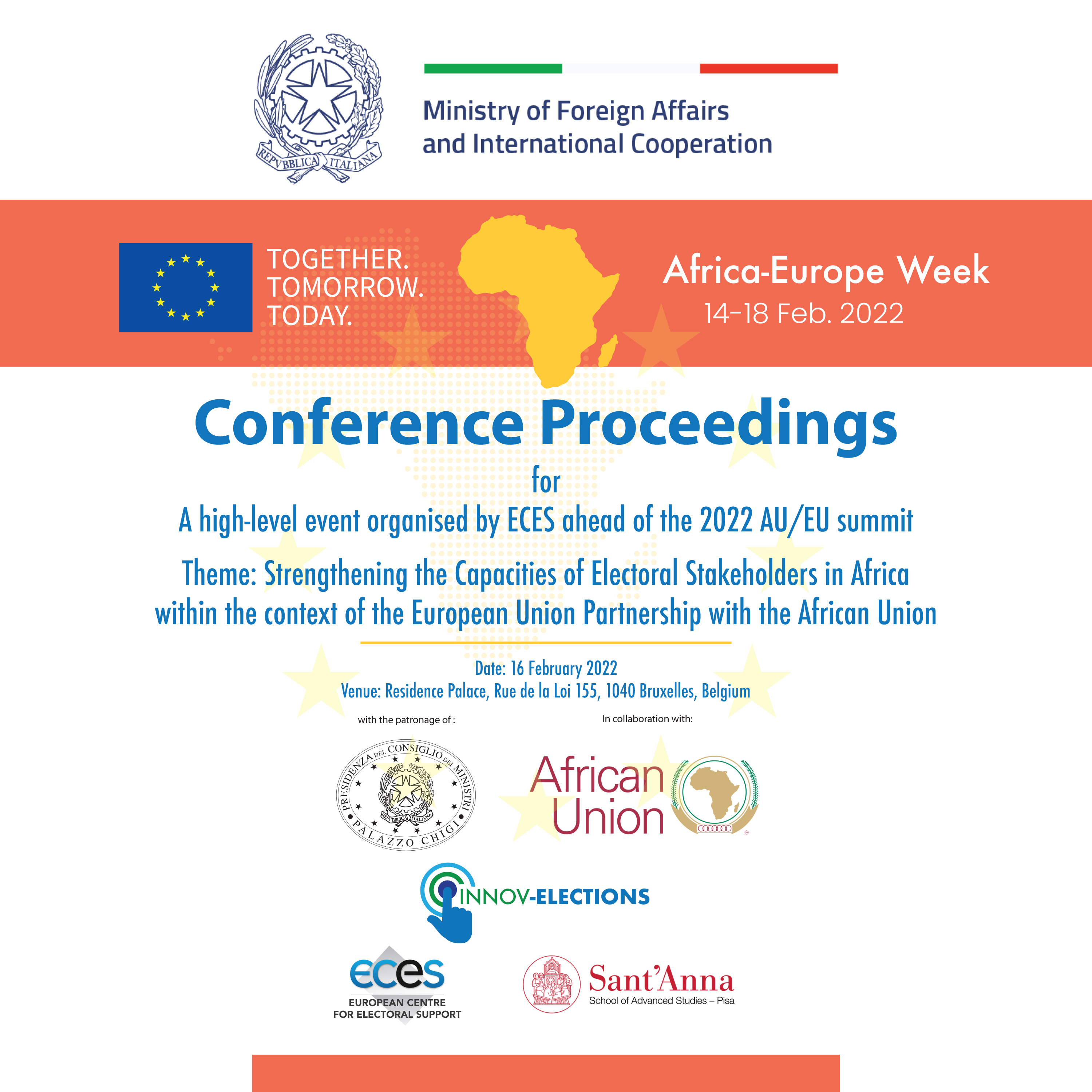 ECES has just published the Conference Proceedings document for the High-Level dialogue focused on “Strengthening the Capacities of Electoral Stakeholders in Africa within the context of the European Union Partnership with the African Union”. The document contains the transcription of the interventions of all the speakers who took part in the High-Level Dialogue.

The High-Level Dialogue was held in Brussels on the 16th of February 2022 and it was organized ahead of the EU-AU summit on the 14th – 18th of February 2022. It was organized with the patronage of the Presidency of the Council of Ministers of Italy and with the patronage of Italy's Ministry of Foreign Affairs and International Cooperation, the European Commission and the African Union.

The overall objective of this event was to jointly discuss the prospects of cooperation between the EU and AU in the domain of Election Observation and Electoral Assistance, targeting the strengthening of election integrity, human rights and inclusive political participation in 2022-2023 and beyond, particularly in countries facing political transition.

The High-Level dialogue represented above all a crucial step within the context of the Innov-Elections project, which was designed and is being implemented by ECES since the end of 2020. The project has been officially launched on 15 December 2020 in the context of the announcement of the Italian Ministry of Foreign Affairs and International Cooperation of its "Partnership with Africa" policy document. Innov-Elections is implemented in collaboration with the Sant'Anna School of Advanced Studies of Pisa (SSSA) and the United Nations Institute for Training and Research (UNITAR).

Indeed, the High-Level dialogue was the first concrete activity of the third phase of the project. The event was enriched by the presence of the Italian Foreign Affairs and International Cooperation Vice-Minister Marina Sereni, proving once again the willingness of Italy to be a protagonist, together with ECES, in the electoral support in Africa. The Third phase of Innov Election will focus on the electoral support for the African Union.

The 3-hour event featured three-panel sessions focused on the following:

1.    Italian and European partnership with Africa on democracy consolidation and support through the Innov-Elections project.

2.    National inclusive dialogues and Elections in democratic transition: the importance of Peace Mediation in electoral processes.

3.    The future of Africa - EU partnership for good governance in 2022 and 2023: how to strengthen electoral processes to consolidate democracy and prevent conflicts.