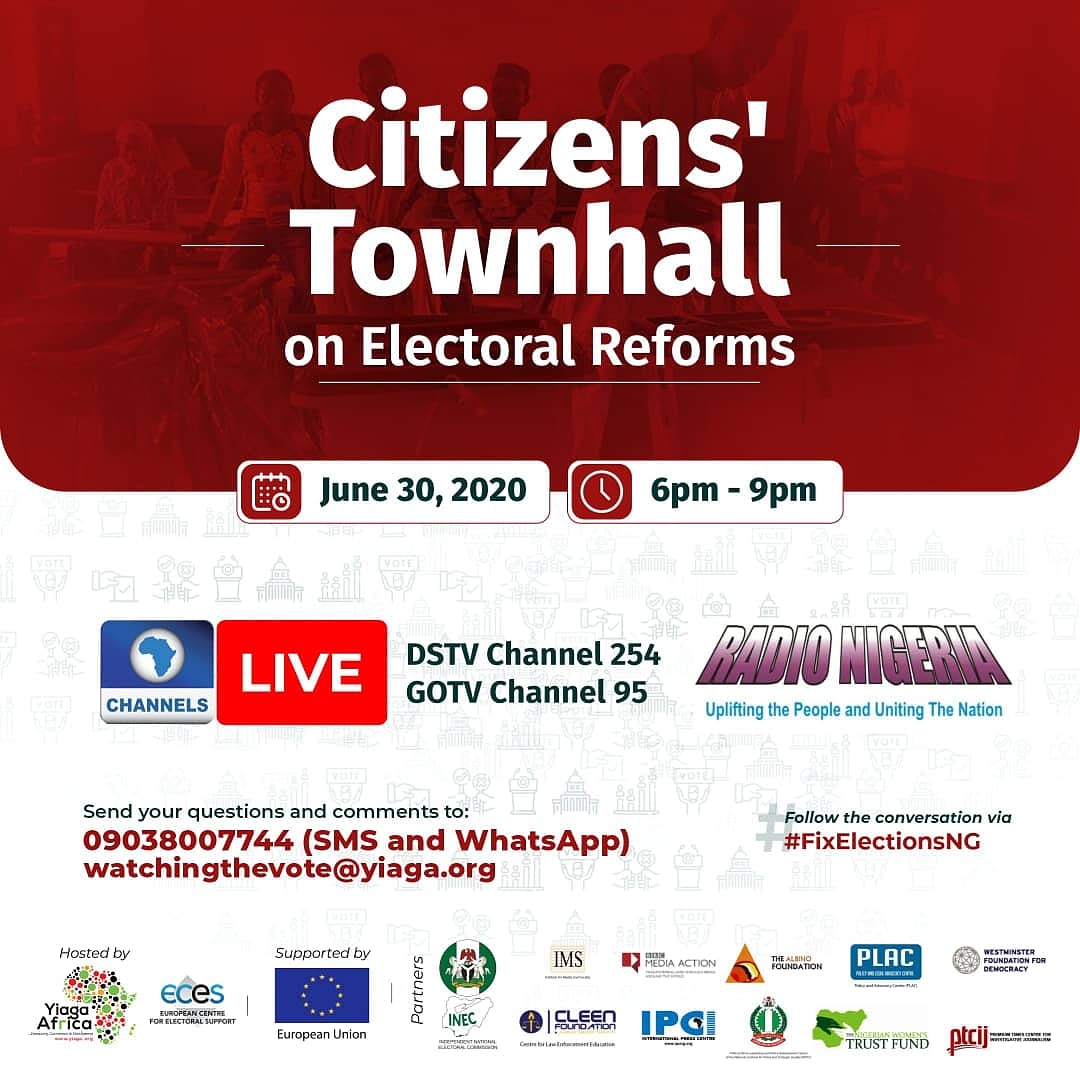 ECES is proud to announce the organisation of a Citizens' Townhall on Electoral Reforms, which was held on 30 June 2020 from 6 to 9pm (GMT +1) within the framework of the EU Support to democratic governance in Nigeria (EU-SDGN) programme.

The townhall, which was co-hosted by ECES and Yiaga Africa with support from its EU-SDGN partners, was an opportunity for stakeholders to build national consensus on priority issues for electoral reforms through an inclusive and collaborative process. Speakers were drawn from INEC, National Assembly, political parties, security agencies, civil society, citizens, academia and the entertainment industry (full list of speakers below).

The programme was broadcasted live on Channels Television (DSTV channel 254 and GOTV channel 95) and Radio Nigeria network service, reaching an audience of over 30 million across these platforms in addition to social media engagements.

Upon conclusion, the dialogue generated a consensus and commitment among all critical stakeholders involved in the electoral process towards ensuring the availability and implementation of an electoral legal regime that will engender access, participation and inclusivity for all Nigeria’s electorates.

In 2019, the National Assembly of Nigeria began the process of amending the electoral legal framework by introducing bills to amend relevant sections of the Constitution and electoral act. With the nation celebrating 21 years of uninterrupted democratic rule amidst an evolving political structure, issues of legitimacy continue to crop-up around our electoral system. To ensure an all-encompassing and progressive electoral reform in line with the aspirations of the people, there is need to aggregate the views and opinions of all critical stakeholders on priority areas for electoral reforms and to prioritised the completion of work on the current amendment bill before the National Assembly and the assent of the bill by the President.

ECES in collaboration with Yiaga Africa and its partners within the EU-SDGN programme are hosting a live TV and Virtual town-hall to intensify public pressure and bring back the electoral reform discuss as a top priority issue for the National Assembly. ECES has supported the INEC to in organising a retreat with the National Assembly in the month of March 2020 to review the proposed electoral act amendment bill, subsequently, a national dialogue on electoral reforms was supposed to follow but was disrupted by the CoVID-19 pandemic.

Now that the National Assembly is back and meeting regularly, there is the need to revisit and conclude work on the electoral act amendment bill. The town hall meeting  therefore seeks to facilitate dialogue with critical stakeholders drawn from the INEC, National Assembly, Political Parties, Security Agencies, Civil Society, Citizens, Media, and will allow stakeholders to share their agenda on electoral reforms.

Through this project, ECES, Yiaga Africa and other EU-SDGN partners will provide technical resources to deepen the understanding of legislators and other stakeholder on key electoral reform issues. The project will raise the awareness of these beneficiaries on recommendations contained in the report of election observers. This will bridge the knowledge gap observed amongst key election stakeholders. Also, beneficiaries like CSOs will be exposed to political and operational tools for effective advocacy for electoral reform. The goal is to support advocacy groups especially election observation groups with tools for follow up on recommendations in election observation reports.