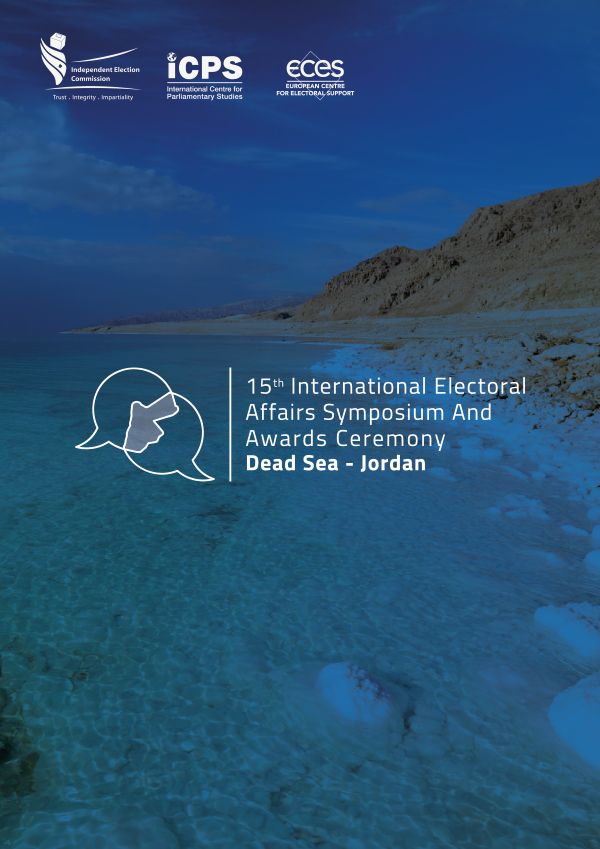 This Brochure of the 15th Int'l Electoral Symposium outlines the event's agenda and speakers' profiles.

Under the patronage of His Majesty King Abdullah II Ibn Al Hussein, the Independent Election Commission (IEC) along with the International Centre for Parliamentary Studies (ICPS) and the support of ECES via the programme  ‘EU Support to Jordanian Democratic Institutions & Development, EU-JDID', hosted the 15th International Electoral Symposium and International Awards Ceremony in Jordan from the 4th until 6th of December 2017.

The opening ceremony was inaugurated by Matt Gokhool, Chief Executive; Monica Frassoni, ECES President; Egidijus Navikas, Head of the Political Section of the EU Delegation to Jordan; Jim Barnhart, Deputy Chief of Mission of the Embassy of the United States of America and Khalid Al-Kalaldeh, Chairman of the IEC. Faisal Al-Fayez, President of the Senate in Jordan, closed the opening session on behalf of the Royal Court.

ECES’ President and ECES Executive Director, Fabio Bargiacchi, led the discussions on the panels dedicated to:

In addition to these, additional high-level discussions focused on the following aspects:

As co-organizers ECES President and ECES Executive Director were asked to deliver two of the International Electoral Awards. The ones for the International Institutional Engagement and Gender Equality. Here below the complete list of the awards and hononorable mentions.

Central Election Commission of the Republic of Kosovo

Electoral Tribunal of the Federal Judiciary of Mexico

Click on the following link to access the Brochure of the Symposium with the detailed agenda of the event and the profile of the speakers.