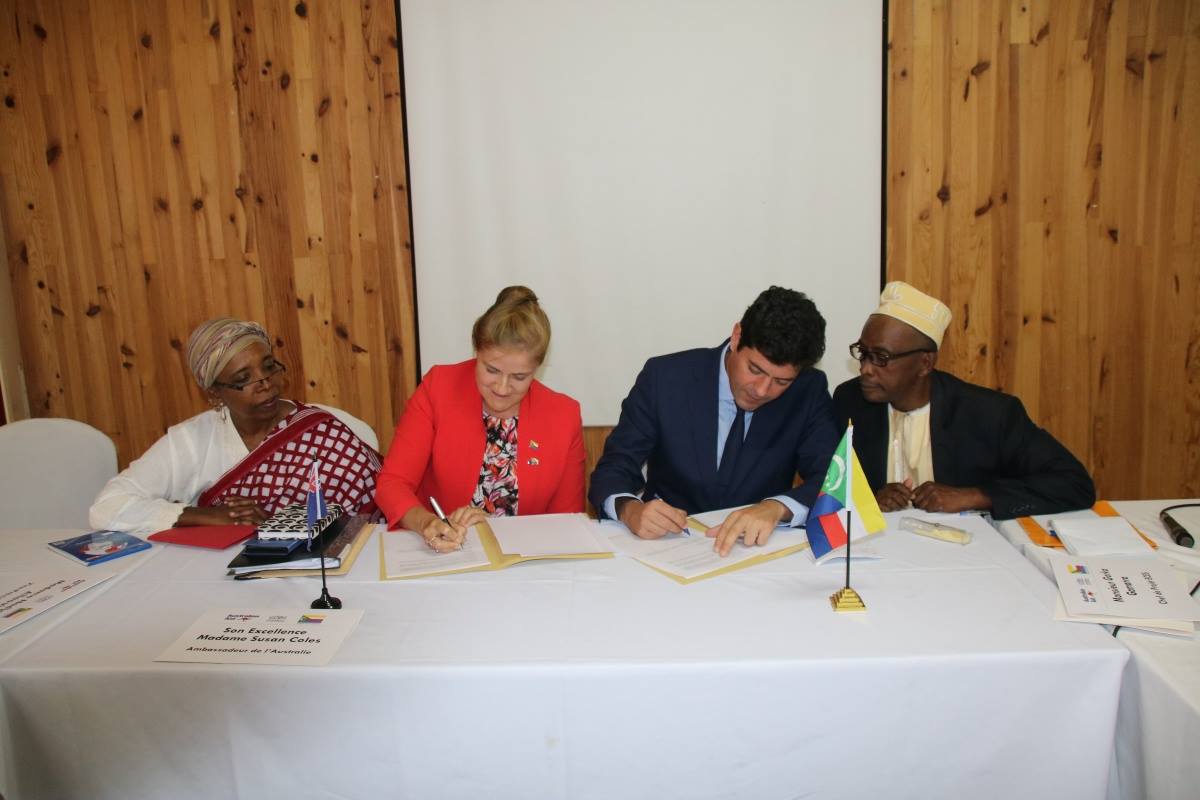 The Australian Government represented by its Ambassador to the Union of Comoros, Susan Coles, and the European Centre for Electoral Support (ECES), represented by the Project Manager, Mr. Gorka Gamarra, were pleased to announce the launch of the project aiming at encouraging women's political participation: "Ngamdjochinda!" at the press conference held in Moroni (Union of the Comoros) on May 2, 2017.

This initiative, which is part of the electoral awareness and gender equality campaign, was the subject of an advocacy speech of the General Directorate of Elections of the Ministry of the Interior, represented by Mr. Mbaé Toimimou and by the Independent National Electoral Commission, represented by its ad interim president, Mrs. Nadjahé Allaoui.

This project, funded by Australia and implemented by ECES for a period of 12 months, aims to encourage the political participation of women in the Comorian political space. "Female candidates for elected positions are indeed relatively low, as indicative, 8 women candidates out of 213 - such as the 3.76% - have been tabled for the elections to the Assembly of the Union of Comoros and, out of 33 deputies only one is a woman, despite their massive participation in the ballot box, up to 48% in the last elections” said Mr. Gorka Gamarra. Yet women represent a fundamental driver of development in the Union of the Comoros. The project's primary objective is to encourage the presence of women in politics and to make women and young women aware of their rights, while facilitating their understanding of the political environment and its challenges.

Women and young women are not the only beneficiaries of the project, which also aims to raise awareness among the population as a whole in order to strengthen and support a joint vision of public life that can, in the long term, facilitate the emergence of a new economic and social force for the country.

To achieve these goals, the Australian Embassy in the Union of the Comoros and ECES oversaw the production of a radio-soap opera about the story of a young woman wanting to become a member of the parliament. This soap opera, which will be broadcast in 2017 and 2018 nationally, will tell the story, from the beginnings of its involvement in political life to the election results, illustrating the pitfalls and challenges to overcome as well as the lessons to be learned and the hopeful experiences of this journey.

ECES strongly hopes that this project will make a lasting contribution to the inclusiveness of the Comorian electoral process, and is also honoured to have been selected by the Australian Cooperation for the implementation of this project.