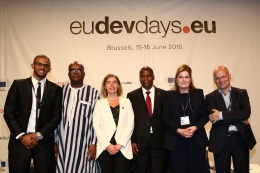 During the last European Development Days that took place in Tour&Taxis in Brussels, Belgium on the 15th  and 16th  of June 2016, the European Centre for Electoral Support (ECES www.eces.eu) and the European Partnership for Democracy (EPD,www.epd.eu) presented the lessons learned from having supported various electoral and democratic processes over the last 5 years in fragile contexts.

During the two-day event, ECES and EPD were present at the EDD Village at stand N° 51, visited by colleagues and a broad range of professionals from the development and international cooperation sector. The stand became a hub for exchange, allowing ECES and EPD to present their activities and their future strategies and to receive some constructive feedbacks on the work done so far. The EDD 16 event has been also the occasion for ECES and EPD to build bridges and create new synergies with like-minded organisation from Europe and elsewhere.

In addition to that, EDD provided a good occasion to present a specific European delivery mechanism democratic and electoral support, crafted by ECES and EPD members, entitled “The European Response for Electoral Cycles Support”. This response is essentially a strategy jointly developed by ECES and EPD, aimed at providing electoral support and contributing to peace and stability by working with all electoral stakeholders throughout the electoral cycle.

During the first day of EDD 16, namely 15th of June, ECES and EPD were represented during the high-level panel “Implementing Sustainable Development Goal 16 for peaceful and inclusive societies - Opportunities and challenges in the security and development nexus”.

The high-level panel was chaired by the High Representative of the Union for Foreign Affairs & Security Policy/Vice-President of the European Commission (HRVP), Federica Mogherini. The following personalities contributed to the discussions: the newly elected presidents of the Central Africa Republic (CAR), Faustin-Archange Touadéra, and Burkina Faso, Roch Marc Christian Kaboré and youth activist Marouane Bakin, founders of « Makers of Hope for Human Rights ».

Adding to this esteemed Panel, Thijs Berman represented ECES and EPD and brought his multi-facetted professional experiences as former member of the European Parliament and several times Chief Observer of EU Electoral Observation Missions, most recently in Afghanistan, amongst other professional undertakings in the democracy field. Thijs Berman, who is currently the head of the EU funded project, implemented by ECES in CAR and aimed at supporting the National Authority for Elections, stressed the importance of promoting inclusive electoral processes and electoral integrity in fragile contexts in order to contribute to a lasting and durable peace - an essential precondition sustainable development.

During the discussions, Mrs. Mogherini renewed the EU commitment to work with partner countries on the long term for achieving common and shared goal and facing interconnected and multilayer challenges that require joint solutions. With regards to this, Mrs. Mogherini highlighted the need of cooperating with partner countries in a spirit of inclusivity while adopting a multidisciplinary approach allowing to implement coordinated actions for sustainable results. One key word that was reiterated was partnerships  between Europe and other continents, most notable Africa, and sharing of experiences. Mrs. Mogherini stressed the importance of “supporting not substituting” local efforts for the meaningful achievement of the sustainable development goals. Along these same lines, Mrs. Mogherini and Marouane Bakit, emphasised how crucial it is to involve youth in the actions implemented in partner countries. The HRVP and the President Touadéra shared their thoughts with regards to the necessity of collaborating with local authorities in order to support democratic process and peace by deep-rooting them at local level.

The key attributes of this European approach to democracy and electoral cycle support boils down to inclusivity, multi-facetted support and durable partnerships in mind that the European Response for Electoral Cycles Support has been developed by ECES and EPD. Lastly, ECES and EPD will take onboard all valuable contributions and suggestions received during the EDD concerning the fine-tuning of the European Response for Electoral Cycles Support. The final strategy will be officially launched within short but will always be considered a dynamic and flexible approach to electoral cycle support, to effectively respond to the multiple challenges stemming from the ever-changing democracy landscape with activities permeated by European values.

ECES and EPD would like to thank all those who contributed to make this event a success!