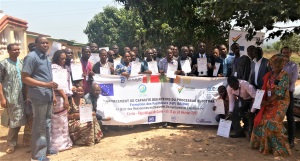 Within the context of the programme to Support the Credibility and Transparency of Elections in the Republic of Guinea (Pacte-Guinea II www.pacte-guinee.eu), funded by the European Union, the European Center for Electoral Support organised in the Administrative Region of Kindia, a BRIDGE (Building Resources in Democracy, Governance & Elections www.bridge-project.org/en/) Training of Trainers (ToT).

This 12-day training, which took place from 13th to 24th February, aimed to strengthen the capacities of Guinean electoral stakeholders. Thirty participants, mainly from the National Assembly, the Ministry of the Interior, the Ministry of Justice, the Independent National Electoral Commission (CENI), the Cabinet of the Presidency of the Republic of Guinea, the High Authority for Communication (HAC), the Constitutional Court and the Civil Society Organisations, attended the course. Along the 12 days, participants become familiar with BRIDGE facilitation techniques while being confronted with an extensive analysis of the management of the electoral processes.

This training aimed to equip national electoral stakeholders with the methodological tools for replicating future trainings, thus enhancing the sustainability of the results while maximizing its impact. This training also aimed to address the growing demand of French-speaking facilitators in the field of election and democracy support.

During the opening ceremony, Mr. Mitty Diallo, representing the Governor of the Region, welcomed the relevance of ECES’ initiative especially with regards to future electoral cycle. He then asked the participants to familiarise with the key notions of the course and to make good use of them. Mr. Dominique WEERTS, Resident Representative of ECES in Guinea and Head of the programme PACTE Guinea II, placed particular emphasis on the objectives of the course as well as on the willingness of ECES to continue supporting the national democracy consolidation process. He, then, invited participants to take the opportunity to deepen their knowledge on electoral processes’ management related issues, and to put this notions into practice during the modular trainings.

The 12-day training ended with the ceremony for the delivering of certificates as semi-certified facilitators to participants.

Following the ToT, the second part of this intense training programme will be the organisation of modular trainings, focusing on strategic and financial planning and on gender and elections. They will all take place in Conakry from the 27th of February 2017 and will allow to train additional electoral stakeholders.