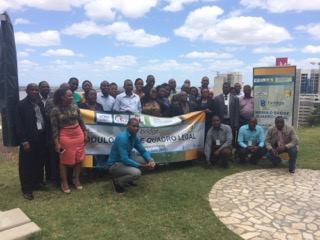 Three BRIDGE Module training were delivered in Mozambique wthing the PEV-SADC Project, Co-funded by the EU. The first workshop, a BRIDGE legal module, was held in a very delicate moment of Mozambican politics when there is an on-going process of electoral reform that should involve all actors of the Mozambican society. The workshop aimed at enabling members of the electoral administration, media, civil society and political parties to open a fruitful and constructive discussion on the electoral reform process and take an active role in the decision making process of such reform.

The first training took place between 27-29 October 2015 to strengthen the knowledge of the legal and regulatory framework for elections and to provide the necessary tools to deepen understanding of the Code of Conduct, the electoral system, voter and candidate registration, campaign financing, campaign expenditures, access to the media, freedom of expression, the voting process, counting and tabulation of results, the role of candidates, party agents and observers, among others. This workshop served also as a platform to foster the discussion over the reform of the legal framework of the Mozambican electoral process. The workshop was characterised by high level of discussion and change of experience between the participants.

Four facilitators conducted the workshop: FelisbertoNaife (STAE General Director), Claudio AlbasineLanga (Director of Civic Education and Training Directorate of the Technical Secretariat of the Administration of Elections in Mozambique, STAE), Rodrigues Timba (CNE Vocal), and Augusta Almeida (member of the ObservatórioEleitoral). The BRIDGE module on the “Legal Framework” allowed to certifying 29 participants as well as it allowed to fully accrediting 2 facilitators.

Participants assessed the course as very relevant to their daily activities. The level of participation and commitment was very high, mainly representatives of political parties that had opportunity to seat together with representatives of Mozambican EMBs, the media and civil society organisations.