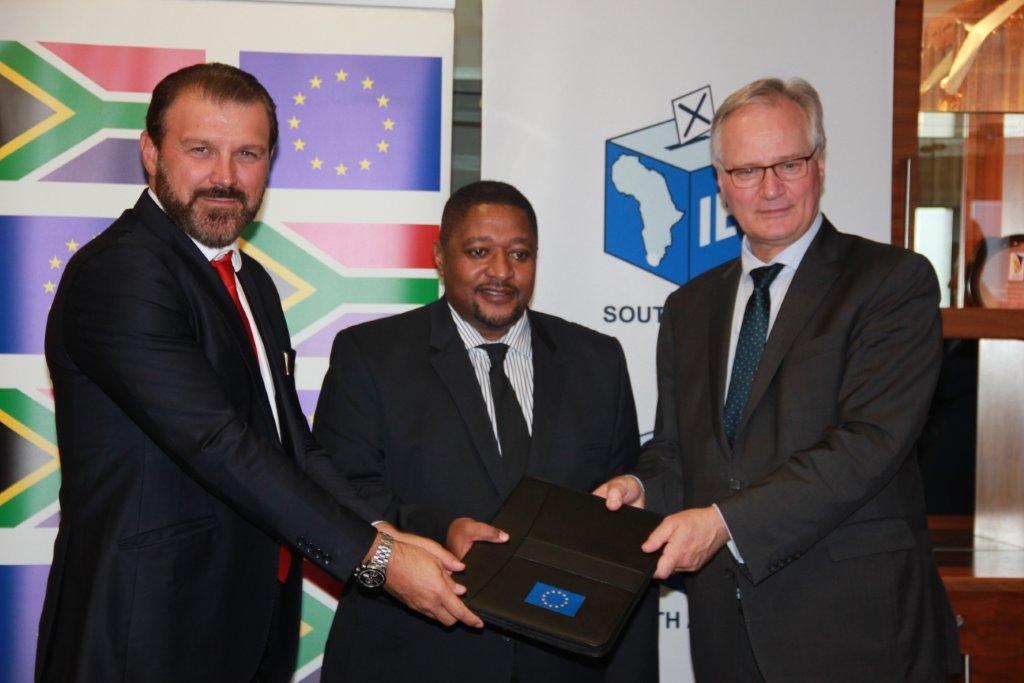 ECES just signed a new EU-funded project to Prevent, Mitigate and Manage Election-Related Conflict and Potential Violence in South Africa (PEV-SA). The project will be jointly implemented by ECES and the Independent Electoral Commission of South Africa (IEC).

The project was signed by the Chairperson of the Independent Electoral Commission of South Africa, Glen Mashinini, the Deputy Secretary General of the European Union External Action Services, Christian Leffler and by ECES’ Executive Director Fabio Bargiacchi.

ECES has been proudly working with the IEC South Africa for several years in the framework of the regional election conflict prevention project, PEV SADC. The IEC is one of the most capable and effective electoral management bodies in Africa, held as example in the continent and beyond, also when it comes to share its comparative experiences.

The overall objective of the project PEV-SA is to support the prevention, mitigation and management of election-related conflicts and potential violence that may arise prior to, during and after the 2019 general elections.

The specific objectives are to:

ECES thanks the IEC South Africa and the EU Delegation for their trust and will do its utmost to implement this project effectively. Two people from IEC and ECES led the identification and formulation process. The Senior Manager for Electoral Matters of IEC, Granville Abrahams who has contributed to several of ECES Leadership and Conflict Management Training Programs (LEAD) and shared the South African experience in election conflict prevention in the SADC countries in the last four years within our regional SADC project.

In addition to his valuable contributions on behalf of the IEC South Africa, Mr. Abrahams has been key in the identification and formulation of this project together with the Senior Electoral Conflict Management Advisor of ECES, Victoria Florinder, who is coordinating all ECES activities in the region, which has become one of the specialisation of ECES thanks to her work. ECES is looking forward to implementing activities jointly with the IEC and EU Delegation in South Africa.